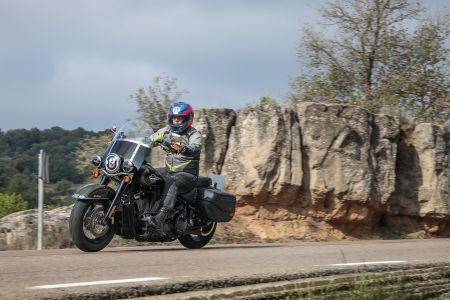 Just weeks after its global unveil, Harley-Davidson rides the new Softail range into the country at a starting price of Rs. 11.99 lakh, ex-showroom Delhi. The new Softail series has brought about the end of the Dyna range of motorcycles of the American icon with eight new models arriving from the platform, four of them being launched currently in India. The company has spent nearly three years developing the whole range and produced eight models off it. The idea is simple and straight-forward – a single chassis and single powertrain architecture to ply the new range.

The bikes will be powered by a reworked version of the Milwaukee Eight 107 engine, a 1,745cc air cooled fuel-injected big-bore V-twin power plant, producing a max torque of 114Nm at 6000rpm. The V-twin motor is mounted directly on to the chassis instead of rubber mounts, making the chassis stiffer than the previous generations. The oil cooler is put between the two downward pipes of the cradle and the height of the transmission has been slightly increased.

Harley has brought in the entrant Street Bob at an attractive price of Rs. 11.99 lakh. The bare basic Softail aims to be the bike that Harley wants its owners to use as their base for customisations. Next in line is the brute Fat Bob which will retail for Rs.13.99 lakh. The zombie apocalypse saviour is one of the sportiest machines to come out of the American brand and will appease to the new gen Harley rider. The Fat Boy arrives to the shores at Rs. 17.49 lakh and is one stunning looking motorcycle. Finally, Harley has got the evergreen Heritage Classic at a premium Rs. 18.99 lakh. The old school cruising motorcycle is more agile than ever and comes with cruise control as standard. All prices ex-showroom Delhi.

Back to previous page